contains handwritten bank ledgers from 1855 through the 1920s, as well as photographs, plat books, marketing materials and early banking machines.

The handwritten bank ledgers contain records of more than 400,000 savings accounts opened by Dollar Bank depositors up through the 1920s.  Customers who were able to write their name signed the ledgers.  Additional identifying information was also recorded, such as the depositor's age, place of birth, occupation and residence. 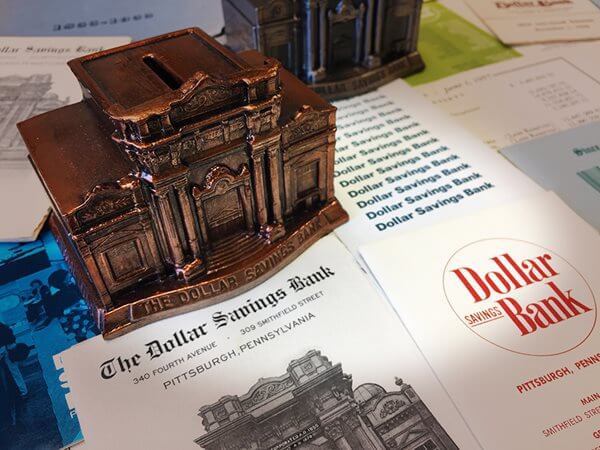 The handwritten bank ledgers contain records of more than 400,000 savings accounts opened by Dollar Bank depositors up through the 1920s.

Customers who were able to write their name signed the ledgers.  Additional identifying information was also recorded, such as the depositor's age, place of birth, occupation and residence.

Also in the collection are cash books recording the bank's daily operating expenses.  Emerging from these ledgers are the day-to-day details of running a community bank, year after year, decade after decade, through technological changes and volatile financial cycles.

Dollar Bank was chartered with the Commonwealth of Pennsylvania in 1855 as The Pittsburg Dollar Savings Institution.

The charter described the bank as a mutual organization where savings accounts could be opened with as little as one dollar.

The names of the 39 incorporating trustees appear on the first page of the charter: 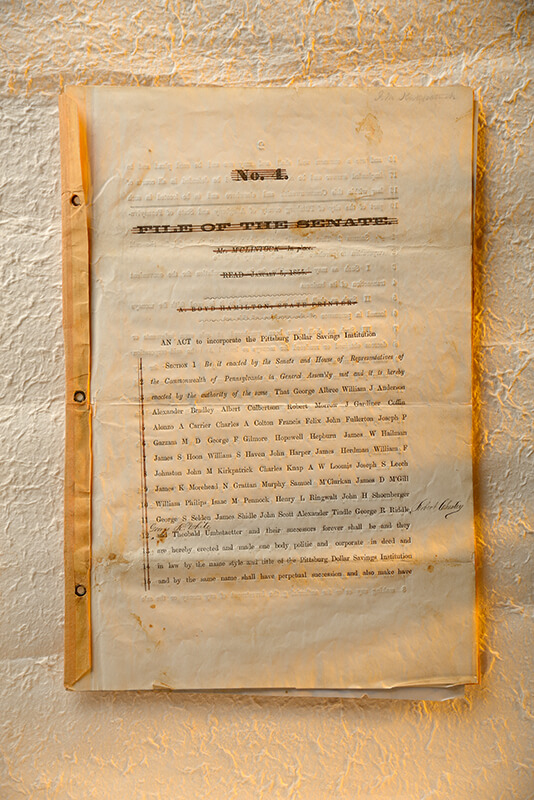 These men represented a cross-section of Pittsburgh's business, law, professional and industrial leaders in the 1850s. Persuaded by Charles Colton of the worthiness of the cause of the new bank, an organization for the working people of Pittsburgh, the incorporators went beyond adding their names to the charter. They staked the bank with their own money, pledging that if the enterprise failed within its first year, the incorporating trustees would reimburse the depositors. 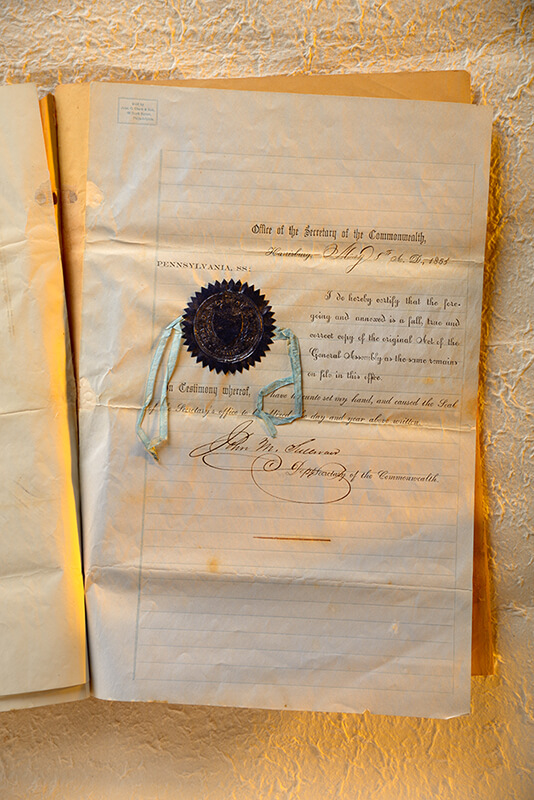 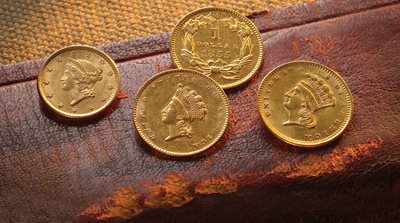 The Coinage Act of 1849 permitted the minting of $1 and $20 U.S. gold coins. The availability of gold for minting had come about largely because of the massive amounts of this precious metal found in the California Gold Rush, ignited in January 1848 by the discovery at Sutter's Mill near Sacramento.

The $1 gold coin went through several design phases. From 1849-1854, the coin featured Lady Liberty wearing a crown. Just inside the rim of the coin were thirteen stars, representing the original thirteen colonies.

From 1854-1856, a redesigned $1 gold coin depicted Lady Liberty with a Native American headdress. The words "United States of America" replaced the thirteen stars.

Starting in 1856, a third design made slight adjustments and functional improvements to the 1854-1856 version. This third design was minted for more than thirty years, up through 1889.

In terms of physical size, these $1 gold coins are the smallest coins in the history of U.S. coinage.

Dollar Bank's corporate seal was derived from the 1855 $1 Liberty Gold Coin design. The seal was approved by the Board of Trustees and was incorporated into the architecture of the Fourth Avenue Building in 1870. The insignia can be seen carved in stone above the doorway at the Fourth Avenue entrance. 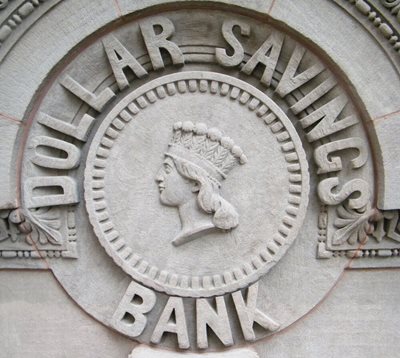 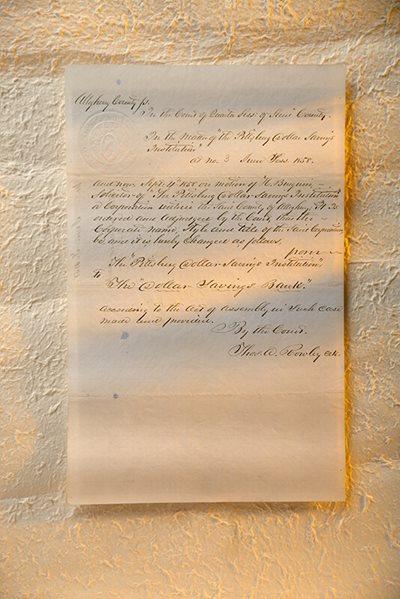 Dollar Bank has had three names since 1855.

The bank was chartered in April 1855 as The Pittsburg Dollar Savings Institution. Despite the lack of an "h" in "Pittsburg" in the charter itself, the bank issued passbooks and ran newspaper ads that included the "h."

Under this original name, the bank published its first semi-annual statement in December 1855, faithfully meeting its dividend obligations to its depositors. 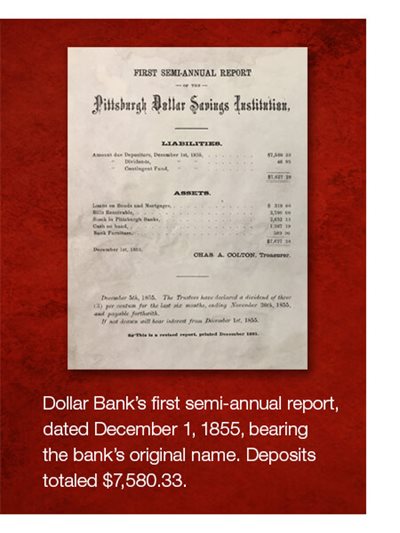 The bank started running newspaper ads under the title Dollar Savings Bank in June 1856. The Board of Trustees voted to approve the new name the following year. The name change, however, still had to be made official with Allegheny County.

Dollar Bank's solicitor at the time, well-known Pittsburgh attorney Hill Burgwin, drew up the paperwork for the bank's name change and submitted the documents to the Allegheny County Court of Quarter Sessions in June 1858. The court approved the name change in September 1858. 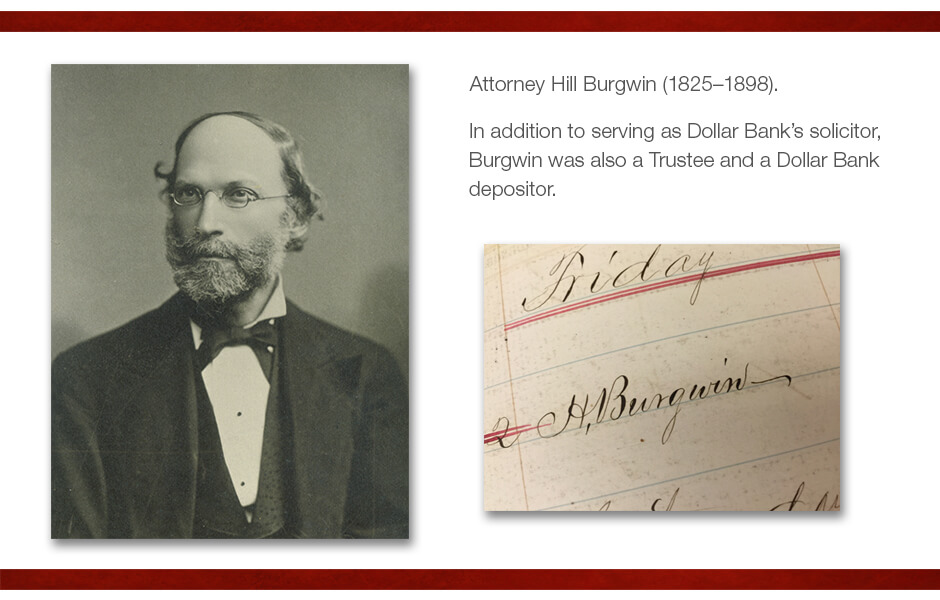 Thomas A. Rowley, Allegheny County's Clerk of Courts that year, penned the official name change document and embossed it with the county's seal. This document has become part of Dollar Bank's Historical Collection.

Dollar Bank would be known as Dollar Savings Bank for the next 126 years. 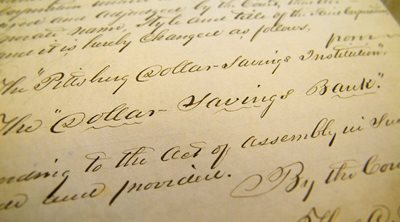 In September 1984, Dollar Savings Bank acquired Continental Federal Savings and Loan in Cleveland, thus extending banking services into Northeast Ohio. The following month, the bank's Board of Trustees announced that articles of conversion had been delivered to the Commonwealth of Pennsylvania's Department of Banking in July 1984, detailing the bank's conversion from a state mutual savings bank to a federal mutual savings bank.

In 1984, Dollar Savings Bank changed its name to Dollar Bank. 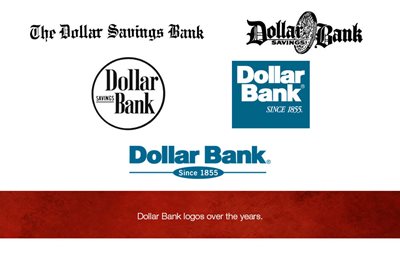 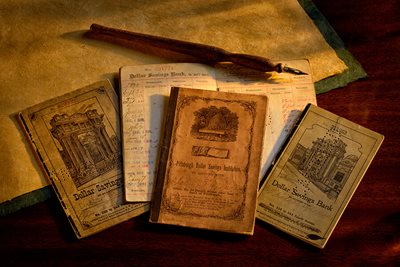 Every customer who opened a savings account at Dollar Bank was issued a passbook corresponding to the account number. The customer signed their name on the front cover of the passbook. The customer also signed the signature ledger, which remained in the bank's custody. Both signatures and the passbook itself were security measures to protect access to the money in the customer's account.

The customer was required to bring the passbook each time he or she visited the bank. Up through around 1920, almost all of Dollar Bank’s customers did their banking in person at the bank’s sole location at the time, Dollar Bank’s Fourth Avenue Building.

Dollar Bank’s records contain occasional references to lost passbooks. In such cases, the original savings account was immediately closed, the lost passbook was noted in the bank’s ledgers to prevent any fraudulent claims upon the account by a finder of the lost passbook, and the customer was issued a new account number and passbook with their balance transferred to the second account.

To better serve Pittsburgh’s large German immigrant population in the mid- and late-1800s, Dollar Bank issued passbooks in German as well as English.

The cover art on Dollar Bank’s passbooks had several designs over the years. The initial design depicted a beehive, symbol of industry (hard work and cooperation). The passbook of John B. McFadden, Dollar Bank’s very first customer, contains a beehive illustration on the cover. 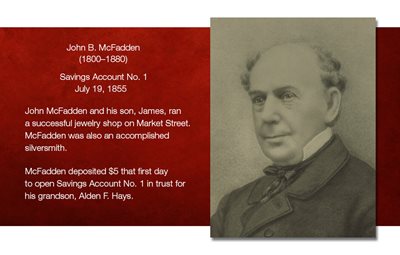 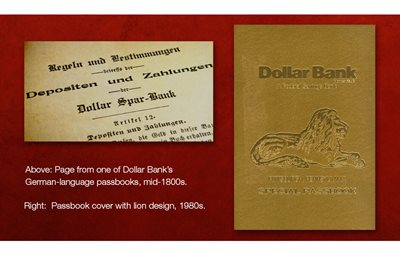 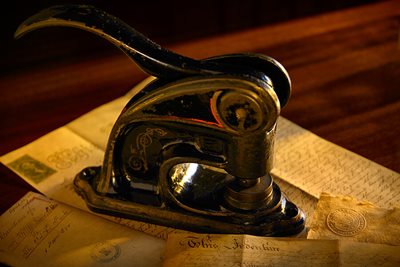 Corporate seals once served as important forms of legal authentication to ensure the legitimacy of documents bearing the name of an institution.

Dollar Bank's first corporate seal was approved by the bank's Board of Trustees in May 1862. In January 1883, the Trustees voted in favor of a Resolution to adopt a new seal. The updated design was described in detail in the Trustees' Meeting minutes:

"... a round seal ... in the center thereof a head and thirteen stars, similar to those upon the Gold Dollar of the United States of the year 1855 and underneath the head this date 1855 and surmounting the same the words 'The Dollar Savings Bank Pittsburgh Pa.'"

An actual impression of the new proposed seal was affixed to the page in the Trustees' Minutes containing the Resolution from January 19, 1883.

The bank purchased a cast iron hand-operated seal press to emboss the corporate seal on official bank documents. Dollar Bank's corporate seal remains a rich part of our heritage, and the vintage stamping press is one of the items preserved in the Dollar Bank Historical Collection. 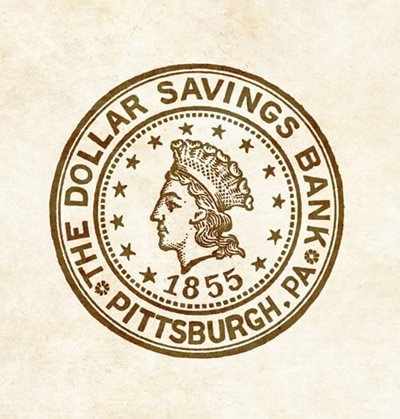 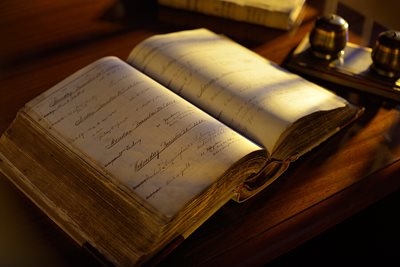 The dates of the accounts recorded in this signature ledger run from July 19, 1855 through January 14, 1864.  Included are the accounts of immigrants, laborers, housewives, Civil War soldiers and a number of notable Pittsburghers of the era, such as Joseph Horne, Lois J. Campbell and Lewis Woodson.