We offer a glimpse of life 100 years ago...highlighting the amazing history of Dollar Bank’s customers, employees and business partners. 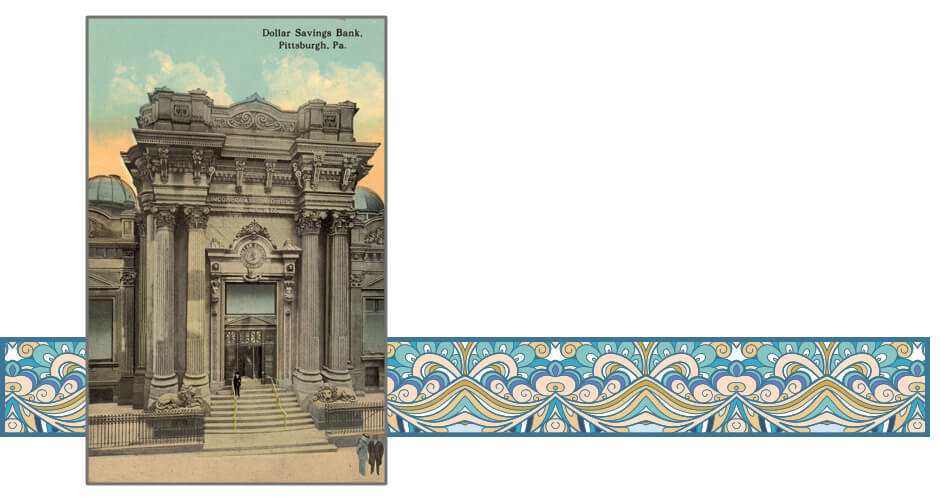 Banking by the Numbers

In 1918, Dollar Bank celebrated 63 years of serving the people and businesses of Pittsburgh and region. 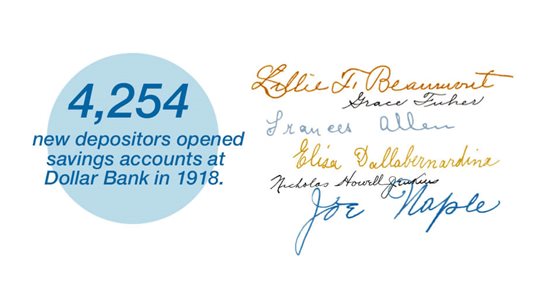 29% of Dollar Bank's new depositors were immigrants. Their most common countries of birth were Ireland, Russia, Austria-Hungary, Germany and England. 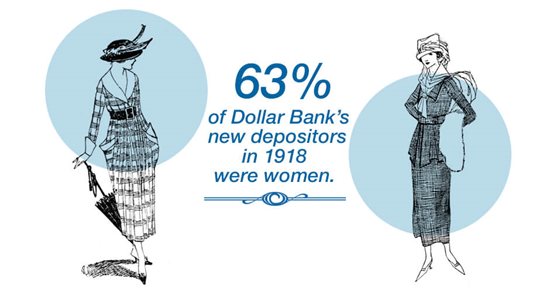 81 national, state banks and trust companies were doing business in Pittsburgh in 1918. Dollar Savings Bank had more money in deposits ($36 million) than any other state bank and all but one of the national banks. 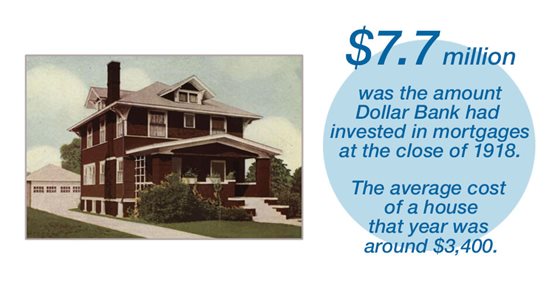 In Business with Other Pittsburgh Businesses

Dollar Bank chose local businesses to provide the overwhelming majority of services to the bank in 1918. When Dollar Bank turned 63 years old in July of that year, the bank's Trustees held a celebratory dinner at another Pittsburgh institution, the Duquesne Club. 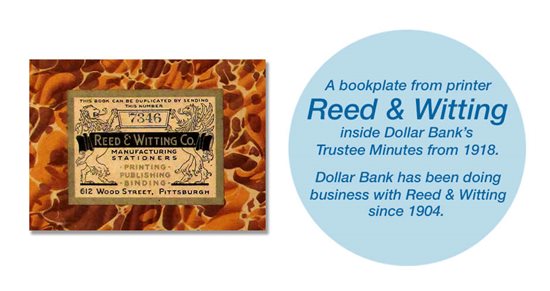 Reed & Witting printed and bound the large hand-written ledgers in which Dollar Bank recorded customer accounts, deposits and mortgages. Office supplies came from James H. Matthews Co., which only a few years before had opened a new plant next to Forbes Field, home of the Pittsburgh Pirates. 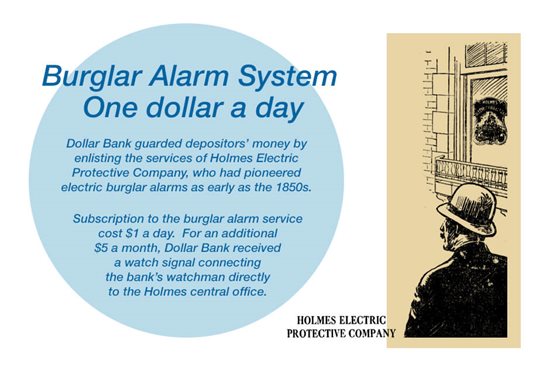 Charles B. McFail's security company provided the services of Dollar Bank's watchman. Mr. McFail was general manager of the Pittsburgh branch of Holmes Electric Protective Company, maker of electric burglar alarms. In 1878, Massachusetts native and entrepreneur Edwin Holmes had brought to Pittsburgh his "Yankee Telegraph for Catching Thieves." By 1918 the Holmes company had an underground cable network connecting hundreds of subscribers' alarm systems to the central switchboard on Fifth Avenue.

The workhorse of office machinery in 1918 was the typewriter. Dollar Bank purchased typewriter supplies and machines from Remington Typewriter Company on Sixth Street. 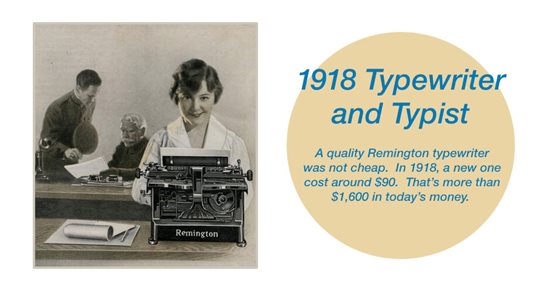 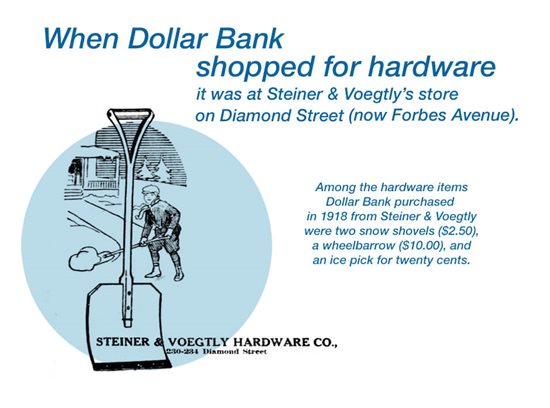 Then as now, running a business well depended on ease and speed of communication. In 1918, telegrams and telephone were the primary means of getting information quickly across great distances.

Two separate telephone exchanges, P&A and Bell, provided phone service to downtown Pittsburgh businesses in 1918. Dollar Bank's P&A bill for August and September of that year was $14.67. The phones themselves were rented from Central District Telephone Company. August's phone rental bill was $12.65. 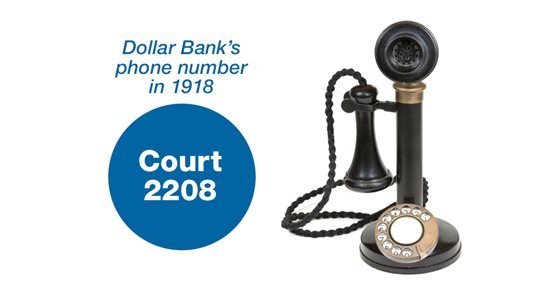 Spending More on Groceries than on Advertising

From 1870 through the 1970s, Dollar Bank employees were provided free hot meals cooked fresh in the basement kitchen at Fourth Avenue. Dollar Bank's "lunch ladies" in 1918 were Mary Matulis and Nellie Nevin. 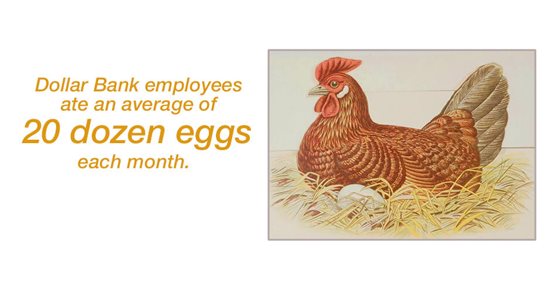 The average monthly grocery bill for employee meals was just over $300 -- nearly four times what the bank spent on advertising! 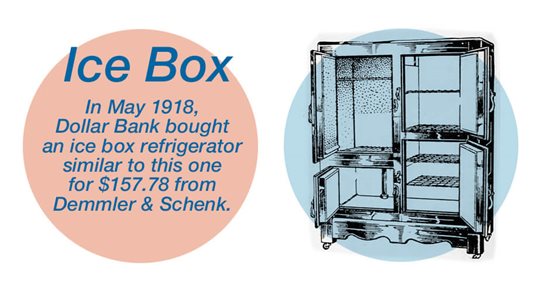 In 1918, the headlines of Pittsburgh's three major newspapers, the Gazette-Times, the Press and the Post, were focused on the war in Europe, which the United States had entered the year before. 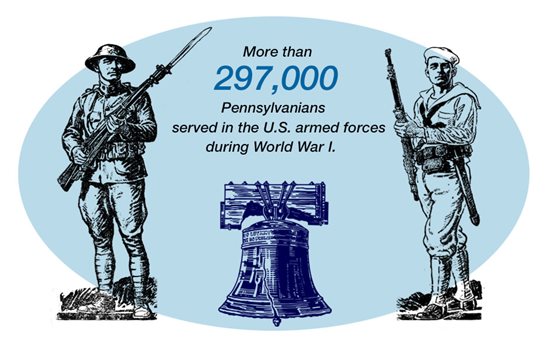 Dollar Bank depositors Michael Kreichunas, Jacob Meyers, Thomas E.H. Robison and Michael M. Wolfe were all serving in the armed forces when they opened their Dollar Bank savings accounts in 1918.

Kreichunas, a Lithuanian immigrant who arrived in the United States in 1912, was a baker at Nicholas Bakery on Penn Avenue when he was drafted. He served as a cook at Camp Lee, Virginia. While in Pittsburgh, he lived on Sarah Street on the South Side. After the war, he applied for American citizenship, moved to Chicago and became a carpenter.

Berg Street, South Side resident Jacob Meyers was a private in Company A, 103rd Military Police, 28th Division (Pennsylvania National Guard), Allied Expeditionary Force. He opened his account by mail in October 1918, unable to visit Dollar Bank in person because he was deployed overseas at the time, where his unit was part of the Meuse-Argonne Offensive.

Thomas Robison was a sailor aboard the battleship USS Vermont, based at Hampton Roads, Virginia. Robison stayed in the Navy through April 1919, spending his last three months aboard the Vermont helping convey American troops home from Europe. After returning to civilian life, Robison became a movie theater projectionist in McKeesport.

Raised in New Kensington, Michael M. Wolfe received his medical degree at Temple University. He served as a medical officer in the Army in WWI. His duty took him to military bases throughout the eastern U.S. After the war, he returned to Philadelphia, where he spent more than 30 years in a successful career as a surgeon.

As the casualty lists in the newspapers of that time attested, a number of Pittsburgh men who served in the war did not return home. One of these was USMC Sgt. Raymond Paul Cronin. Born in 1893, he served four years in the United States Marines and returned to civilian life as a letter carrier. He opened a savings account at Dollar Bank in September 1916.

When the United States entered the war in April 1917, Cronin re-enlisted in the Marine Corps. He was deployed overseas in June 1917 and promoted to the rank of sergeant in February 1918. In June 1918, Cronin was with the 5th Marine Regiment when they were engaged in fierce combat around Chateau-Thierry, France. Sgt. Cronin was killed in action on June 6, 1918 while trying to establish liaison with an adjoining French unit under heavy machine gun fire.

After his death, V.F.W. Post No. 267 here in Pittsburgh was named in his honor. When his name was inscribed on a bronze plaque along with those of other Pittsburgh post office employees who served in the war, Cronin's sister Helen unveiled the tablet. In September 1921, his remains were returned from France, and a memorial mass was held at Church of the Resurrection in Brookline. He was buried in St. Mary's Roman Catholic Cemetery in Lawrenceville. 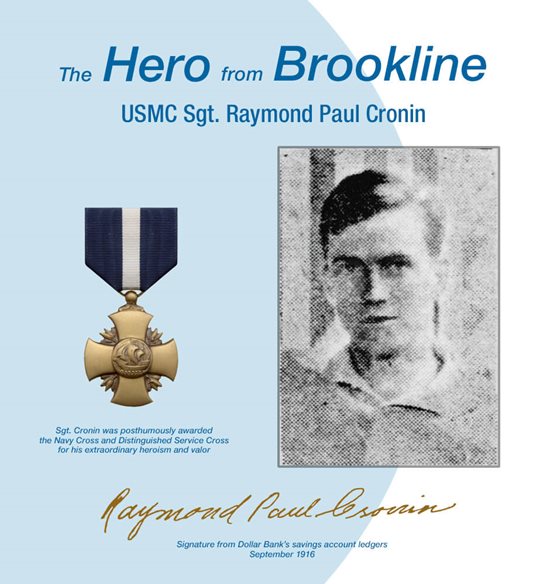 Since Dollar Bank's founding in 1855, the bank has supported local communities of faith by helping them build houses of worship for their congregations. Scores of churches, synagogues and temples in the Pittsburgh region have been built with funds from mortgages issued by Dollar Bank.

On January 23rd of that year, Dollar Bank paid $900 for a perpetual membership in the Pittsburgh Chamber of Commerce.

Many of Dollar Bank's community contributions in 1918 were related to the First World War. The bank contributed $100 to a military entertainment fund, $500 to the Jewish War Sufferers Fund, and $470 to a savings stamp campaign run by the War Savings Publicity Committee.

Dollar Bank contributed $10,000 to the American Red Cross, which was striving to recruit nurses and medical professionals and collect medical supplies to aid troops serving in the war. 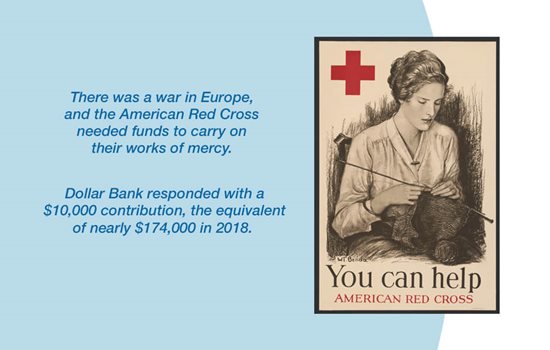 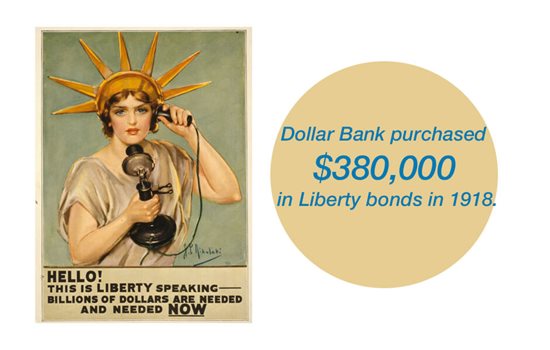